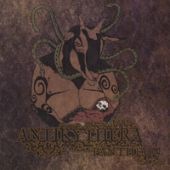 Knowing literally nothing about the band, or actually even hearing about them in the first place... I just did the one thing I could do and simply dove right in to the album listening part of my process and was hoping that I just might find a diamond in the rough that is begging to be exposed to the metal world.

I would have to say I was somewhat shocked at what came out of the speakers as I sat there and listened to it. As hard as it was to try and explain what it was that Antikythera really is as a band. As close as I can really get to conveying what the band is, I’d have to say it is this odd sort of intermixing of Hardcore Punk styled lyrics and musical angst with sped up Doom Metal riffage overtones that also have this weird sort of experimental vibes scattered throughout.

Musically the whole album is wickedly heavy, rough as what comes out of a sandblaster and just plainly relentless... but seemed that the project is disjointed through each song that comes out. Antikythera reminds me sort of the SpineFarm Records artist Sick... who is one of those bands that are out of the normal scope of metal... but Antikythera has really nothing to offer. They clearly can play... sadly sometimes, talent does not come together and makes good music... far from it.

Even though the album holds some seriously heaviness and a major hurricane of blasting guitars , the album seems to have been very badly produced and even worse it seemed more than ill-conceived by the artist themselves. It comes across as having no real flow to all of it. There is a sense that thee band really are not understanding what their talents might be able to do if they tried.

It just is not worth the time. It is interesting from a purely musical standpoint, but that sentiment wains surprisingly fast... and just fades off and dies thankfully. Mixing the genres of Hardcore and Doom I have thought of doing many times, but this is not the way to do it.