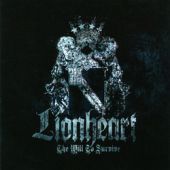 San Francisco based Lionheart is one of the self proclaimed ‘MoshCore’ style of hardcore. A hardcore movement that has shades of metal throughout. Being an old punk fan from way, way back (Black Flag, old Corrosion Of Conformity and alike) I was eager to see what the band had to offer.

These days, I am not as big of a hardcore fan... as I am a metalhead, but I do respect the movement... Lionheart does not promote that feeling within me. Upon listening to them, it seems that they are just a regurgitation of Hatebreed or a poor Cro-Mags thing... I am not a big fan of Hatebreed at the best of times... but have liked some of that bands stuff over the years... and I am a huge fan of the Cro-Mags.

This is just a poorly constructed mirrored image of Hatebreed, to the point of it being rather obvious that is exactly what they were doing. The album has its moments along the way, but not enough to satisfy anyone... or to fool anyone either. They are just following the footsteps already planted without any sort of changes or advancements.

Some will really like the album, but for me... it is not good when you have to rip off some of your influences so badly to do it. Perhaps if they focused a little on making their sound more metal (My suggestion would be a sort of a doom/punk sort of thing, judging by the sound they can get) or at least to try and do something other than copy Hatebreed.

Literally copying other bands nearly killed off metal for good in the later part of the 80's and early 90's (the hair metal movement did not help)... with bands doing the same thing here, this punk movement could end up going the way of the Dodo bird. Extinct! I hear potential in this new breed of Hardcore, hope that these bands find their own voices rather than copy established acts.