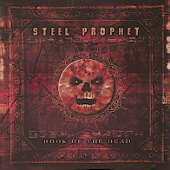 As some of you may know, it takes more than what I’ve heard to date in order to impress me with power metal (some may prefer the term "pansy metal"). With that in mind, you could understand why I immediately needed to listen to AC/DC’s Highway to Hell after spinning Book of the Dead.

Quite frankly, the way I see it is that if music is to be badass, then it must be potent and tough; this cannot be achieved if you sing like a fairy. The incredible thing about Steel Prophet’s latest entry in the book of power metal, is that the music is often potent and tough, sporting a set of gonads that would do well with a voice like that of Bruce Dickinson, James Hetfield or even Sebastian Bach.

I’m not joking here, we could have a kickass all time classic metal band IF the vocals didn’t sound like Journey’s Steve Perry just had a hot poker shoved up his ass. Ok, well that’s extremely harsh, and to vocalist Rick Mythiasin’s credit, in a few spots, he does show a little muscle, like in what I considered to be the best track, Phobia, which fuses the vocal influences of Dave Mustane and Dickinson.

The elements of the music that have been dubbed "psychedelic" (which they weren’t) by some promoters and critics, lent an emotional and fascinating complexity to the sound. At times, the mean guitar riffing is more than admirable and the rest of the team displays an incredibly comfortable cohesion with all other band members. As much as I’m spewing on this disc, the music sans vocals is really very good.

Bottom Line: If you’re a power metal fan, Book of the Dead, is a must have; by far, it is the best power metal I’ve heard. Otherwise, goddammit, this album is completely destroyed by girly ass-monkey vocals.