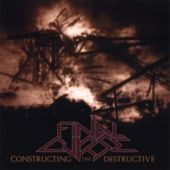 Thrash Metal is coming back in a big way at the moment, and I for one applaud that because that was the type that got me into metal in the first place. Whether you do it straight out old school or give it the twist and crank it out like the new Thrash acts that are doing it right now. With that said, here is Final Curse who have thrown their hat into the thrash ring, to signify that they are vying for ultimate supremacy.

Like an old classic muscle car that has a huge bore...high performance engine in it, this band hits the gas and shoots down the blacktop at break-neck speed. Final Curse is just like that damned car as it is out to blow your doors off.... old school thrash has never sounded so damned good. Taking their props from the likes of Exodus, old Anthrax, Tank and even real old school Testament...FC seems to have come up with something that sounds really new and fresh while keeping the core feeling of thrash the way it is.

The only fault I have with the whole album is with the recording itself at times. It seems that the way it has been recorded is somewhat lacking in many spots throughout, and muddies the bands attack to some degree... but even these little speedbump are thankfully very few and far between and ends up never takes away what these young thrashers are trying to deliver.

Most of the songs on this album are just flat out very good and solid songs, but I would have to say that both ‘Brother’s Knife’ and the head hammering ‘The Inferno’ show that you can have a stadium filing anthem and never be wimpy either. You do want to sing along, while banging your head in joy (got a neck-brace anyone?).

Clearly Final Curse can put out incredible songs while still trying to sonically lobotomize you at the same time. The band is more than pretty good right now... cant wait to see when they mature a little musically. So if you don’t know what I am saying.. Final Curse are poised on the verge of metal top rung to take their spot of honour... the next album should see them doing just that.