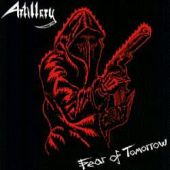 Buy on: Bandcamp
Type: Full-Length
Release Date: August 9th, 1985
Label: Neat Records
Genre: Thrash
1 Time Has Come
2 The Almighty
3 Show Your Hate
4 King Thy Name Is Slayer
5 Out Of The Sky
6 Into The Universe
7 The Eternal War
8 Fear Of Tomorrow
9 Deeds Of Darkness
MetalBite on YouTube

I confess: it took many years before I understood the inner strength, the power and the dimension of Artillery's debut. I had the same situation with Mercyful Fate's two classic albums, but the style of Artillery's compatriots was very extraordinary, and this might be an explanation. But Fear of Tomorrow is not without peers. So, it remains a mystery to me why I did not enjoy this album right from the beginning. Perhaps I was just suffering from a rare sort of allergy against Danish bands.

Well, there were two songs that I liked immediately. The straight "The Almighty", based on a conventional verse-chorus-verse pattern, hits the mark with regard to its accessibility and catchiness. Roughly the same goes for "Out of the Sky". The Danish express starts rolling and who will be able to stand against it? The listener is confronted with a stormy, dark and sinister monster. Once unleashed by its creators, it leaves a trail of devastation. Especially this song shows, in hindsight, the enormous sound modifications of the band from the debut to their most famous work. The complete absence of the smoothness of "By Inheritance" is remarkable and Flemming Rönsdorf sounds like a demon from hell. In other words, he is far away from the approach he chose on their third full-length. His voice expresses darkness and calamity and he manage the deep tones very well. The entire album, the artwork as well as the music, creates a nightmarish feeling. Pure 1985 underground!

The niche black thrash did not yet exist back in the mid-eighties, but today I would label the album as very dark, venomous thrash, not least because of its production. The sound engineers were not interested in transparency, fine nuances or technical details. They put the focus on a dusky atmosphere without killing the numerous brutal elements of the relatively complex songs. Moreover, they did not take away the dynamic of the material. From this follows that even a decent, but not outstanding song like "The Eternal War" scores with its vibrant solo part. This is just one example - there are more songs that glitter with interesting details. The socio-critical title track, for instance, possesses a comparatively melodic chorus which does not meet the thrash standards, but its powerful, almost frenetic verses with the massive double bass speaks another language. Sometimes the band sounds like the (much) heavier alternative in terms of Danish occult metal. The first minute of "Deeds of Darkness" almost spreads some Mercyful Fate vibrations, but this introduction leads to a pretty fast and straight part. I guess Denner and Sherman agree that this would not have been the best surrounding for the King's falsetto.

Well, there are two songs that I still don't like very much. "King, Thy Name Is Slayer" has a well flowing speed part, but mainly it tends to doom metal with rather crude vocal lines. "Into the Universe" starts much livelier and faster. Yet all breaks down with the half-baked bridge ("come with me, come with me") and the failing chorus. Anyhow, Fear of Tomorrow paints an apocalyptic. hopeless picture of the future and has rightfully become a classic. If I compare my rating with those of my colleagues, I am still not sure whether I really have realized the whole quality of this album.