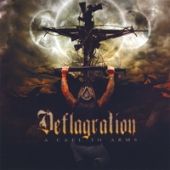 A sound comes out of my speakers like nothing I have heard before... damn, sounds like a Thrash version of Pantera on steroids laced with speed while they were on a three day binge of cheap Whiskey while carousing with many sordid women as well... Did I get you attention right off the bat here? Let me tell you that Deflagration did!

Hailing from a place called Findly, Ohio (yes, I did say Ohio) Deflagration comes at you like no other band as they lay waste to the bad seed of metal that might be in their ways. As brutal as they are honest, this band pulls out ever last ounce of themselves and records them for all to hear and enjoy.

They have described their own brand of music as "Dirty Heavy Metal", and that is exactly what they have given. This so overwhelmingly astonishing four piece deliver a growling blast that can be felt on the Richter Scale anywhere on the planet. Laced with venom and power, the band certainly delivers a punch like a heavyweight fighter would to an unsuspecting person like Pee-Wee Herman.

Dimebag Darrell(RIP) would have loved this band so much that he would have probably asked to join up, because this is right up his alleys... it is completely down and dirty, in your face while layin’ in the gutter pukin’ Southern fried Thrash Metal at its most colourful.

Songs that pack one hell of a wallop and a half are ‘Chainlink Hammerhead’ and the all too brutal ‘Vile Chrome Bastard Machine’. The rest of the album is damned good, but it is these two tracks that really stuck in my mind. So in short, go out and get this album from Deflagration as soon as you can... trust me dudes, you’d might end up really kicking your self later for not doing it.