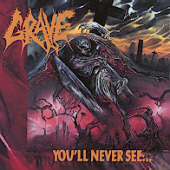 Though they were not the first to use the signature chainsaw guitar tone, Swedish death metal pioneers Grave have actually been on the radar since the late 80's, releasing a demo under the name Corpse. The demo work of Grave is quite a force to be reckoned with in the realm of early death metal, despite often being overlooked in favor of their better known countrymen - it was more repulsive than much of what the genre had to offer at the time, and this tendency culminated in the death metal classic known as 1991's Into The Grave. I take that debut effort to be one of the finest representations of death metal in its purest form, Swedish or otherwise, to this very day. The music is as rotten as the iconic cover art, thanks in equal parts to Ola's riffs which have the perfect blend of doominess and aggression, and the deeply guttural death growls. The following year, Grave released their sophomore album titled You'll Never See..., which, despite being a worthy sequel to the first album that is largely cut from the same cloth, it doesn't seem to be held in the same esteem as its older brother.

I'll admit that this 1992 album is not quite AS GOOD as the perfect death metal debut that is Into The Grave, but if you like one, you'll like the other. The first album has a tad bit more character and energy to the songs, but on You'll Never See..., the overall direction does feel a bit darker and meaner than the debut, ('Obsessed' and the fan favorite 'Christi(ns)anity' have quite unnerving verses) but is just as filth-ridden. Some of the riffs, like the opening one in the title track, feel a bit thrashier than before, but there's still plenty of rotten guitar work to be heard on tracks like 'Severing Flesh'. Overall, the instrumentation is varied, especially in the riffing department, which is where this album shines the most aside from the deeply guttural vocals. It's because of this varied instrumentation, especially the versatility of the riff structures, that every song feels distinct from one another from the very first listen, but the substantial drum sound doesn't hurt either. Furthermore, this album masters the niche known as mid-tempo death metal. Bolt Thrower and Obituary usually (rightly) get the credit for executing this style superbly, what with their driving sense of groove, but songs like 'Morbid Way To Die' offer a similar momentum with an increased weight to them, while also mixing Sabbath-like doom progressions and playing techniques into the verse riffs. All of the latter points lend the entirety of Grave's second album a very visceral feel that suits the gorey, anti-Christian, and occasionally nihilistic lyrics.

The only real critique I have for this album would be the lead guitar, because although it's pretty killer when it does come in, this album could just use more solos to compliment the excellent riffs. Another splendid idea would be having the lead guitar harmonize with the rhythm guitar during the slow doom sections, in the way traditional doom bands like Trouble and Pentagram did. Overall, this album might be a bit more well-recognized if it reached "Cause Of Death", or for closer comparison, "Like An Everflowing Stream" levels of soloing potential, while of course being far less melodic than the latter Swedeath classic.

I get the sense that people feel albums like this one are death metal on autopilot and therefore far too generic to be memorable, but I look at it in a more positive light. I see this as exemplary death metal that still feels fresh in terms of songcraft. It's true that I gravitate more towards raw old school death metal than anything technical or melodic, largely because it has that visceral feel to it that I mentioned previously. However, that's not all there is to it. Just as I feel Grave's exemplary execution of death metal tropes is a good thing, I also feel that on a broader scale, a traditional approach leaves plenty of room for genuine passion and unadulterated creativity. Grave isn't growling about death and gore for mere shock value, but rather, there's a sense that it's a darker form of expression for feelings like anger and despair, which detractors of this kind of fare don't really understand. As nihilistic and esoteric as some of the more cryptic OSDM bands may feel, it's a lot more human and applicable to our natural feelings than bands who go out of their way to invent something "original." In reviewing a somewhat underappreciated album like You'll Never See..., I have an opportunity to describe what it is about this type of death metal that captivates me so much. The brand of death metal these Swedes offer on this album deserves more credit in the death metal scene overall, because it's the prime example of an artform being done with real intent and purpose behind it.