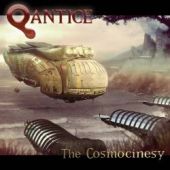 Progressive styled metal can be so damned pretentious at times, seeming to be wanting to be somewhat cartoonish, even though the musicians themselves are serious artists. Many bands have had their careers sunk by this fact, where their talents are overshadowed by that... So what, if anything, does this have to do with Qantice?

Walking that (often way too fine) line between shredding metal, and an off shoot of some very weird art which is in turn brought together as a Science Fiction novel and progressive as well, this band gets points for trying to be very original lyrically. That said, it is too bad it all sounds like a really bad recorded out take that could be from the new Trivium studio sessions or any Dragonforce album. Right down to the sound of the vocals and the minor lead breaks, this is exactly what you get.

The story which the album is built around seems to be very interesting and often engrossing (I read those lyrics over and over again), but the music turns you off faster than people offering chocolate covered grasshoppers at a vegetarian convention. It is sad, the story which the album was all done around does have legs... too bad the music has ended up chopping them off at mid-thigh.

In my opinion only here, if they have done the album in a way heavier and more dark feeling sort of way... the albums outcome would be a better fit. As it stands, it is intriguing but not compelling in any real fashion. Qantice is a real let down after reading the bio for them... talks a big talk, but has nothing.

Musicianship: 9
Atmosphere: 7
Production: 7.5
Originality: 7 (for the concept of the lyrics only- 5 without)
Overall: 7