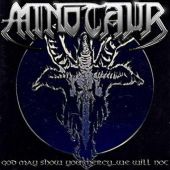 The revival of Thrash: love it, loath it, its happening and Minotaur is riding the wave. It’s been 11 years since this cult German Thrash outfit has produced a full-length album, with several splits and EPs thrown in between.

"God May Show You Mercy…We Will Not" is the second full-length in Minotaur’s history, and has proven itself an overall solid album with few complaints. The production for this release could be better, but then again it adds more grit to their sound, something I personally enjoy here. The vocals are way mixed out though and are something I’m on the fence about. More on the edge of Black Metal, Richwien’s scratching vocals are a large factor in defining the Minotaur sound. They aren’t exactly favorable for my taste, yet it would be a sad thing to have them any other way. Again, on the fence. Moving on, the riffs are catchy, the song structures solid, and the drumming up to par, ‘Princess Of Hell’ is a track I found myself returning to most. Minotaur’s songs will invoke head-banging action, though you won’t find anything new or outstanding so far as writing is concerned. At least they haven’t remolded themselves based on today’s trends, a sad decision many bands decide to make. "God May Show You Mercy…" is wrapped up with cover of W.A.S.P.’s ‘Animal (Fuck Like A Beast)’, which translated well.

Minotaur’s latest is entertaining for anyone who appreciates an uncompromising classic Thrash sound, as long as expectations for originality stay low.