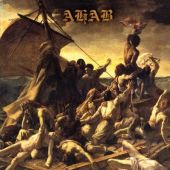 I first discovered Ahab about two years ago on the band’s The Call of the Wretched Sea debut and was pretty impressed. While I’m not overly sold on the guttural-sounding vocals, I am overly-impressed with doom and “stoner” rock as it’s affectionately known in some circles. Plus, a band that’s seemingly obsessed with oceanic themes and sea tragedies is interesting as well (Gordon Lightfoot’s The Wreck of the Edmund Fitzgerald remains one of the more haunting songs I’ve heard). So upon diving into Ahab’s latest release I’m once more treated to a band bent on tragedy-by-water epics and they didn’t disappoint.

The down-tempo sludge that is this trip into the real-life sperm-whale attack on a ship called the Whale-Ship Essex, which eventually sunk. This left the crew to rely on cannibalism to survive, hence leading Moby Dick writer Herman Melville great inspiration for his classic novel. The opening track, 'Yet Another Raft of the Medusa (Pollard’s Weakness)', reads like a modern day Edmund Fitzgerald in its sheer poetry of lyric and tune. While not nearly as folk-sounding as its predecessor, it’s hauntingly beautiful build-up to the album is rife with originality and introspection. A solid meshing of prog and doom metal, the album is one-hour-plus of heavy riffs, somber instrumental passages and low vocal prowess that severs any and all lines of banality and mediocrity. The album is a musical trip to sea in many regards and it works rather nicely.

The idea of the concept album has been around since David Bowie went to out space and Alice Cooper started having nightmares, but to fashion such a relevant lengthy idea in the current age is not an easy feat. The target audiences have changed and the casual attention span has lost some of its potency with a myriad of peripheral distractions, but Ahab captures a fine piece of aquatic interpretation. The shortest song clocks in at just over seven-minutes, and aside from Opeth very few bands have been able to create such opuses and have them remain vital and interesting throughout the duration. Ahab understands the need for mood music, so to speak, and just when you feel that the seas have become too chaotic for man, the waters slow to a serenity that the music both creates and employs perfectly. If you’ve a vivid imagination this album is for you.

The music actually flows like a novella if followed and ingested evenly. It was a welcome change from the norm of everyday metal music with the heaviness of Black Sabbath finding a home in the watery graveyards of Ahab’s The Divinity of Oceans.

This album is a good journey all around.