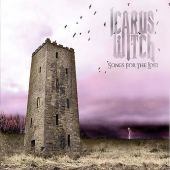 There is a new movement going on out there. It has been coined as the ‘The New Wave Of Traditional Metal’. If there was a band that clearly explains what this is, Icarus Witch would be the dictionary explanation.

This is a band that have embraced the varying styles of old school metal. Using influences like the legendary Black Sabbath, iconic Brits Iron Maiden and even have this heavier twist on Led Zeppelin as well. They seem to take it all in to what they create, but yet still do it all in their own way.

From the very second the CD called "Songs For The Lost" starts, you hear it clear as a bell on a calm morning. There is great talent held here along with a barrel full of attitude with great conviction for setting out and making the best music without ever selling out.. Icarus Witch delivers it all with such genius that you think that you have been transported back to the 80's... and believed every last note while it played.

The whole album is a thing of pure metal beauty from start to finish. What blew me away the most was the Def Leppard cover ‘Mirror, Mirror’ (a song I played in a band years ago). It was amazing as they were true to the original, yet brought a freshness to it. The fact that they had the phenomenal Joe Lynn Turner( ex-Rainbow, Yngwie Malmsteen, Deep Purple fame) as the guest vocalist on it just made a amazing rendition just seem to surpass into legendary status.

As plain as the huge nose on my face... Icarus Witch delivers a old school album with such a breath of freshness that makes metal grow and become stronger. With all of the Death Metal and Grindcore flying around right now... it is good to be hearing plain yet very heavily delivered melodies that makes your head start moving without a moment of hesitation. Old is new... I like it!