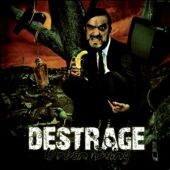 The saying "One man's trash is another man's treasure" applies here as I am exposed to the auricular assault of Destrage. I'm not equating them to trash, rather saying that this is definitely not my cup of tea.

There were certainly a lot of raised eyebrows coming from me as I tried to be open-minded to this band's sound, which is accurately described by their promotional material as "Alternative Melodic Death Metal", although I might add that there are occasional elements of Power Metal as well. This album is energetic and varied in its display of playing-styles, especially with the vocals and guitar, although these varied elements fit appropriately without feeling "thrown in". It's obvious this band is guitar-driven as technical duets and solos are around every other corner. At one point I am even pleasantly surprised by their nailing of a polyrhythmic phrase.

Overall this album sounds rather like a hodgepodge of over-enthusiastic musicians, with thrashy fine-grit vocals alternating with Linkin Park-esque clean vocals alongside hyperactive guitars on a canvas of emotion I would describe as generally "determined" and "animated". Hints of mild melancholy make brief appearances, giving some indication that there's a greater level of emotional depth and 'sophistication' from the source of this all-around "uplifting" work, an album whose level of emotional intensity remains the same throughout. There were in fact a few phrases that I was genuinely fond of, yet for some reason would morph into something else entirely almost immediately upon appearance.

I imagine these guys playing in a blissed-out state of "cool" as I'm listening to this, a 'higher' form of conventional being I can hardly relate to. The term "new-school" comes to mind. A good sound-track for a video-game geared towards the male, thirteen to eighteen crowd, and definitely a step up in "heavy" for the alternative or "skater" crowd as it's a safe form of "extreme" minus the voodoo. There's enough technicality to be appreciated but not an overdose that cannot be understood. Fans of Alternative Melodic Death, and perhaps Stam1na, take note.