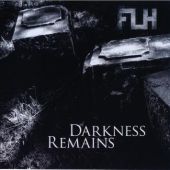 Canadian metal certainly is taking a huge steps in getting some well deserved respect in the global metal market. Being Canadian, I am proud to say that we are... but I will tell the truth as well! I do not overlook if a band is good or if they really do suck donkeys ass in the end. That said, enter in now... FLH, a Quebec Canada based metal band. The question is this good or does it suck?

On first listen through the CD, I am completely struck by the sheer diversity of metal the band seems to produce. There are so many styles of metal living on the album, and every last one of them in what can be called as working in total harmony. Many bands over the years have tried to do something like this, yet has failed miserably... FLH seemed to crack the elusive code to make it all work out..

You got some major old school thrash in here banging away with some killer vocals which makes any headbanger feel the need for the horns in the air. Then comes a track that could be described as being almost a epic styled Doom Metal that made me smile (Whispering Memories)... a classic song already. There is even some stripped down yet so incredibly passionate Speed/Power metal tracks through the rest of the album. All of it is completely over the top musically, the do pack a punch that would make Mike Tyson proud and all with class that is unheard of is a young band.

For some bands, trying to have so many varying styles is not a good sign.... and for most chimes a death sentence for any band while alerting the listener to a group having a personality crisis. With FLH, that is not the case, far from the truth. FLH showcases that they do not want to be tagged just one style or another, and just be a metal band... if they ever were, their originality and creativity could be suppressed or even killed off.

Iffy production hampers the album a little in different parts of the album, but never once does it detracts from the brutality, power or the honesty either. FLH’s "Darkness Remains" is a true shining star for Canadian metal no matter if I say it or not... so I just will shout to the world, some simple advice from one metalhead to many metalheads.. Listen to it, Dammit!!!