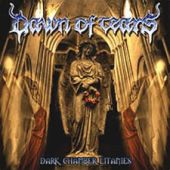 This is good stuff for Melodic Death fans, the entire album is easy to ‘digest’ and listener friendly without shutting the doors to the dark fantasy realm they’ve created. I can only compare the experience of this EP to an action flick. It’s that turning point about 90 minutes in when the protagonist accepts his path to destroy evil and so preps for confrontation. Following is the final battle itself, and though it is a tense 20 minutes the protagonist and audience know they will win in the end thanks to the mood established by the soundtrack; hence the underlying hopeful quality of the EP I have already mentioned. Keyboards play an important role in all of the tracks, too much so for some tastes, but it is essential to the overall mood of the album. Of course, every instrument used in the band has its own important role but in the case of "Dark Chamber Litanies" the keyboards are depended on to distinguish this EP from so many others. There are many a catchy riff spread throughout all five tracks and there is definitely an audience for the combo of the clean and dirty vocal layering.

You may have noticed in the nutshell overview that ‘wandering’ was one of several choice words. This is because the song structure for the most part was not as tight as it could have been. I had difficulty keeping track of where songs began and ended and I did not get the impression that that was intentional. Dawn Of Tears has a lot of good ideas but the EP simply doesn’t offer enough breathing space for all of them to reach their potential. The shortage in editing seems to be a common problem in many bands today. This overcompensation leads to overwhelmed listeners who return to the metal classics that keep it straightforward.

There’s a lot of good stuff going on for Dawn Of Tears, I would call "Dark Chamber Litanies" a solid release if it were not for its wandering nature at times. Aside from that, I do believe many fans of Gothic and Melodic Death alike will find this a nice addition to their collection.