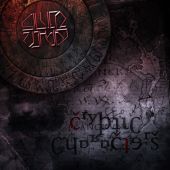 Cincinnati Ohio is a place that I have heard little to none in the way of metal that has actually been coming out of that city. Hearing Silver Cypher after just catching some of the buzz... I was more than just interested.

Sounding like a combination of music from Classic Metal, melodic stylization of Thrash and some very strange vocals really that are really close to System Of A Down frontman Serj Tankian’s off beat warbling (a band I am not a fan of normally, but I do have the greatest of respect for)... they sound pretty good with all of these parts working as one, and catches my attention.

It is true that Silver Cypher seem a little dated in certain places through out the six tracks on "Cryptic Characters" CD, despite that the music tends to make you forgive that and you are whisked away to metal-land. This all has the mixing of Nu-Metal vocals with some old school metal crunchy-goodness... which really makes it quite nice to discover.

Some would not like this album and be totally turned off, some will become instant fans... that is just the truth of the matter here. You can't please every one all of the time.. Especially musically. I like this band, and I like it a lot...but does not live up to the potential I actually can hear lurking just below the music.

The fact that I like this band, if nothing else, shows me that if System Of A Down had decided to make music like this instead of what they are now world famous for... I would be a true fan instead of a respecter. Silver Cypher has brought forth a pretty good outing.