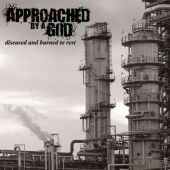 French Canadian Death Metal has come quite far in the last five to ten years, and has gotten to be nasty and very brutal in that time. Quebec is known for this barbarous yet seemingly so popular style of metal, and the next band called Approached By A God is a foremost example of the savage and so unrelenting wave of metal that is pouring coming out of this part of North America.

This young band with the blasphemous sort of name take everything to the extreme times ten, having this amazing mixing of sheer angst with a veritable wall of sound that slams in the center of your forehead. It sound pretty good for a first album, my only complaint is the ‘self-done’ productions end of things. This alone really sort of killed the strength of the album, but never once hid the fact that this band had a hell of a lot to offer up. It would not be the greatest Death Metal album ever... but is pretty damned good in it’s own right.

If all of this rawness cane end up being harnessed right (and gets better recording as well), Approached By A God might end up having some military applications with their metallic assault. They just might end up being a weapon of mass metal destruction... and harnessing them could only spell the destruction of posers and other lower forms of life. With all of this brute force these guys deliver... no wonder I am this damned excited. After hearing ‘Feasting The Beast’, anyone would be I bet.

For a first time outing, Approached By A God are damned good and seem to be steamrolling to bigger and better things... I say with time and with some maturity, along with getting into a proper studio for better production - the future really does looks rather good for this band. They are still so very young and have a lot to learn, but having great angst and seemingly unlimited talent that is untouched as yet makes me think.... they could end up being French Canada’s answer to Cannibal Corpse.

I for one look forward to seeing if I will end up being right with them... perhaps I have been approached by a METAL god(s) in training? Perhaps not... time will be the only yardstick for that.