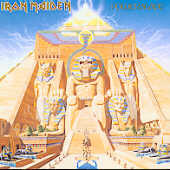 The first signs of Iron Maiden just starting to flirt with more progressive song structures begins precisely right here on 1984's Powerslave. Surprisingly, it happens to be my favorite Iron Maiden album to date, despite not exactly liking this trend of the band becoming ever more progressive. They've had their moments with epics such as "The Clansman" and "Ghost of the Navigator", but I find the majority of Iron Maiden's more "mature" works to be obnoxious and dull, it would be borderline pretentious if I wasn't already aware of what the band has the potential to do. To put it plainly, the band is capable of much more than presented on just about everything post - No Prayer for the Dying. The track listing boasts three songs that hit the six-minute mark including the title track, "The Duelists" and "2 Minutes to Midnight" in addition to the whopping thirteen-minute album closer, "Rime of the Ancient Mariner", and even the shorter songs here have their complex and intricate instrumental moments. Speaking of instrumentals, Iron Maiden definitively craft their best one yet, "Losfer Words (Big 'Orra)", which would be the first time they'd do an instrumental since "Genghis Khan" from the Di'anno era, not to mention the last instrumental they'd ever do up to this point. Instrumentals were never Iron Maiden's strongest asset, "Genghis Khan" from Killers had shown potential in how evocative it was but failed to have enough going on in it to dedicate giving it its own track on the album. Considering they were sitting on unused material such as "Women in Uniform" or "Invasion", I really wouldn't have been able to justify including it on the album, the only unused track that it does beat would be the meandering butt rock of "Spiritual Guidance", and there's no way to know whether that truly is an unreleased Di'Anno era Iron Maiden song or if Di'Anno was just saying that during his solo band's live shows back in '84.

Oh, that reminds me, this came out the same year as Di'Anno's debut album, and the difference really couldn't be any more night and day. While I'm nostalgic for the first couple of albums, it's clear to see that the band made the right decision in retrospect. Di'anno wasn't quite washed up just yet, his solo band actually made some pretty cool tracks at this point, he wasn't a cue ball yet, and he wasn't disrespecting his fans at live shows yet. Throughout the 80's, I'd say that Di'Anno was expanding as a vocalist as a matter of fact, while Bruce didn't really have much to improve on to begin with... and seriously, he doesn't really try, "The Duelists" finds himself using the same exact pentameter heard on the previous album's "Where Eagles Dare". It's the only point at which Powerslave starts to lack originality, but even then, I'd say that "The Duelists" is just a better version of "Where Eagles Dare" as it continues to unleash the insane guitar work we'd been hearing on the tracks leading up to this such as "Aces High" and most notably "Flash of the Blade". Considering "Where Eagles Dare" came first, I should probably regard this as little more than the band running out of ideas, but everyone else here makes up for Dickinson's phoned-in performance.

What's going on between Dave Murray and Adrian Smith is fantastic! Usually when people ask the question "Iron Maiden or Judas Priest", I'm left scratching my head thinking "is that really a question? Judas Priest, no contest", but Powerslave actually finds this guitar duo outperforming any performance that K.K. Downing and Glenn Tipton ever managed to put together. You know the title track from "Screaming for Vengeance"? Powerslave is basically that song stretched out between eight tracks, the riffs are seemingly never ending, and the spark and spontaneity is to be lauded. The best part of this entire album is the dual solo heard on "Flash of the Blade". This is madman genius levels of musical brilliance taking shape here. One guitar is frantic and on fire while the other is slower and doomier, creating a harmony filled with trepidatious energy. Most importantly, the guitars actually have the distortion back in them this time around, where Piece of Mind found them coming across a little too clean and flimsy. Powerslave puts the crunch back in them, and no song highlights that better than "2 Minutes to Midnight", the radio pleaser from this album. When it comes to the band's more dedicated fan base, "Aces High" becomes the clear winner, when it comes to this album's more dedicated fan base, there absolutely is no clear winner. Every song is phenomenal.

The title track is huge, and this, along with the also dumbfoundingly huge "Rime of the Ancient Mariner" are the only songs that really have that Egyptian theme that the album art eludes to. I'd say that "Flash of the Blade" also has a little bit of the Egyptian aesthetic going for it as well, but that's a little more debatable. The title track; however, is truly Iron Maiden's very own version of Metallica's "Creeping Death". That's probably a really good connection to make actually. A lot was changing between the release of Piece of Mind and this album, with thrash bands, especially Metallica making a splash in the United States. What's interesting is that NWOBHM bands would often take inspiration from thrash metal without ever compromising the more traditional sound that the U.K. was known for. As a result, bands from the U.K, were getting heavier and heavier, sometimes even more hardcore punk driven without ever stepping into the thrash metal territory. Iron Maiden are a pretty good example, with Paul Di'Anno's Battlezone being a good example of what the U.K. metal scene could do towards the later end of the decade on albums such as "Fighting Back" and "Children of Madness".

While i think this is Iron Maiden's best album in their entire discography, the band would continue to innovate and expand their horizons, especially on their following two albums, Somewhere in Time and Seventh Son of a Seventh Son. Further albums would continue to find the band in unfamiliar territory, so the buck really doesn't stop here. There's still plenty left to hear that's worth hearing, if at least for nothing more than the novelty factor behind releases from 1990 onward. The pyramids and ancient Egypt allude to a lot of different things for a lot of people out there. An ancient civilization perhaps more advanced than history gives them credit for, some are starting to theorize that the pyramid was actually a giant electrical power generator. If that's true, perhaps ancient Egypt had their very own heavy metal bands. Conspiracy theorists will undoubtedly claim that the aliens brought us here and made the pyramids, religious folk will think back to the exile. For me personally, I'm a pretty simple guy, Egypt's prime export is Powerslave. Sorry to all the Egyptian heavy metal bands out there, I know you're being represented unfairly, but come on, make an album as good as Powerslave, and then we'll talk.

Superchard gets super hard for:
'Flash of the Blade'
'Rime of the Ancient Mariner'
'Back in the Village'
'Aces High'