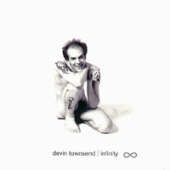 What a nice looking CD. A white cover with a smiling Devin Townsend sitting on it. It looks safe….WRONG! Never judge a book (or CD in this case) by its cover. This CD is not what it appears. Being recorded at the height on Devin’s emotional instability this album is a chaotic dive into a mind that has knows no boundaries. It’s every emotion rolled into one brilliant and epic masterpiece. It's hard to explain the feeling you get when you listen to this CD, it's like insanity. Not anger, just pure crazyness.

I can only describe the sound as massive, the power of all the recorded elements together is crushing. Devin’s talent in the production area is only surpassed by his musical visions. "Infinity" has some of the best production I have ever heard, every instrument is clear and fits into the mix beautifully with no masking.

Genre wise, this album covers quite a few areas. The opening number ‘Truth’ is a more traditional Devin-like cyber-thrash track, but as you wade deeper into the album we are presented with some varied styles and moods, obviously reflecting Devin’s sentiments at the time. Tracks like the almost comical ‘Bad Devil’ are a real surprise. With this album you can hear more and more of Devin’s 80’s roots coming through…mainly in the vocals, his vocal talent is more evident on this recording, going from his well known growls and screams to perfectly controlled clean vocals with amazing power. The guitars are wonderful, full of bottom end that combined with the amazing drumming make a powerful combination indeed. This CD is not classic metal by any means. It’s the work of a (at the time) very troubled man who was expressing his complete confusion through his music. Lyrically this album is also a little hard to classify. The words in general a fairly abstract, but with obvious underlying meaning to Devin himself.

Compared to past releases like Strapping Young Lad, this CD is more in the progressive vain of "Ocean Machine", but classifying this album is not only quite impossible but would not be fair to it in any way. The many styles of music that Devin has somehow combined here makes for a very interesting listen indeed.

Bottom Line: This CD is nuts, but brilliant in everyway. If you are at all interested in metal a little left of the norm, "Infinity" is for you.