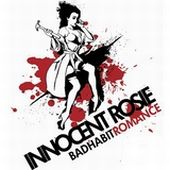 Sweden is the home of some of the most intense, entrails-eating, decapitating inducing Death Metal around today yet there is a band comes out of the small nordic country and shows another musical side of themselves.

Innocent Rosie is a band that I instantly found that I could explain as taking the DNA properties of Skid Row, G’N’R, Motley Crue and any other sleaze peddling band from the 80's heyday as well, mix it all in a test tube and wait nine months for it to burst forth. The bastard child of all of this is a remarkable four piece straight ahead rock and roll tsunami that is called Innocent Rosie.

No Death Metal on this album, just down and dirty blues based adrenalin fuelled hard edged Rock and Roll here. This is not a band that just regurgitated this style just for the sake of it or to make some quick money on the new sleaze bandwagon... no damned way!! It is clear that the band lovingly crafts every note and beat to be a part of themselves.

IR clearly does their music straight from the heart, never once copying anything yet they have that familiar vibe as well. This is a accomplishment that is now so very rare in music in general. These guys are so good, I venture to say that this is exactly how the mighty yet now defunct Guns And Roses should have ended up like, rather than imploding and making a mockery out of themselves (one listen to "Chinese Democracy", you’ll know why I say that) and the fans that have kept them alive in their hearts.

Innocent Rosie filles that void well, and shows that down and dirty rock still has a place in the world today... Thank God!!