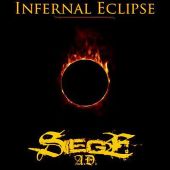 Buffalo, NY based Siege A.D. has been touted to be a sort of bridging point between the melodic crush of Iron Maiden and the sheer pommelling power of Lamb Of God. That is sort of a true assessment... but not it is not at the same time.

Siege A.D. may have some fairly clear similarities with the likes of Lamb Of God, but that is only a little for me. What I am actually hearing, I think they are way closer musically to very early Sepultura (before the tribal beats) and add in a serious touch of Cannibal Corpse pounding rhythms into it as well as some Dark Angel as well. The whole ‘maiden’ comparisons seemed not to be there.

Solid and meaty songs coupled with the fact that they did not over produce the album, made the over all atmosphere nearly perfect. It clearly is the fact that there is that whole simpleness and sparseness throughout the CD, which makes it work so damned well. So many bands in this style of metal do this when recording, to the point that it takes away the barbaric brutality that this music was born to release. Siege A.D. do not forget that point, and make that there sound.

They do not break any new ground musically, but they do the whole Thrash/Death thing so good. Songs like the head cranking ‘Bipolar’ or the sledgehammer like attack of ‘Forged In War‘ is just the few of many examples of that.

When it all said and done here... this is album that most headbangers would be proud to have in their collection. I thought they were great... now I hope they go to Godly status. Because they have the talent to do so.