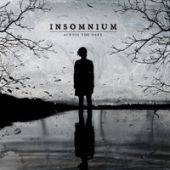 Type: Full-Length
Release Date: 2009
Label: Candlelight Records
Genre: Death, Melodic
1 Equivalence
2 Down With The Sun
3 Where The Last Wave Broke
4 The Harrowing Years
5 Against The Stream
6 Lay Of The Autumn
7 Into The Woods
8 Weighed Down With Sorrow
9 The New Beginning
10 Into The Evernight

How doth one improve upon perfection? Why, in the form of Insomnium's fourth album, "Across The Dark". As Insomnium set the bar rather high for themselves with their previous masterpiece, my brain had quite some difficulty picturing how a better album could possibly sound. The answer lies within their self-surpassing follow-up which has finally been fleshed out for mine eager ears to witness. But before I continue with my unending stream of verbal worship I feel the need to state the following: don't let the "Melodic Death" classification fool you. It's simply the 'carrier oil' for which Insomnium's pure genius is released. It's, perhaps, the medium-crust pizza-dough on which their variety of succulent toppings are offered. (Actually I prefer to think of such ingredients immersed within the dough as a sort of cake mixture.) Not only is the dough made of the finest flour on earth, the ingredients themselves are such that, one would potentially roll back one's eyes and let out a rather inappropriate-sounding moan immediately upon taste. And it only gets better as the ingredients meet every weeping tastebud on your tongue, readying you for the climax as you gulp down this aural Pizza of the Heavens.

Too many ingredients are often distracting, yet Insomnium has managed to seamlessly and expertly blend a mixture of Progressive Melodic Death and mournful Finnic melody with a touch of Doom, creating an effective and stabilized formula in which a powerfully solemn musical genotype is born. If thou art like many, including myself, who rather promptly rejects any product bearing the term "Melodic Death", then I invite thee to reconsider, for such "accurate" yet far-too-simplistic categorization may have ironically repelled many who would, without doubt, enjoy the fruit of Insomnium's labor. Amazingly there are absolutely NO "filler" songs in this album that will have you pressing "skip". I naturally feel this would be an inadequate review if I didn't touch upon some of the album's musical highlights as they're just begging for me to address them. But as every song on here is so damn good they all deserve some mention. I am left no choice than to, as briefly as I can manage, tip my hat to each song in the following words of well-earned praise... Get ready to indulge your alpha-brainwaves on this breathtaking journey across the dark.

This magnum opus starts you off with the song 'Equivalence', in which a simple but to-die-for slow-tapped riff is nestled. She's in grave danger of losing her potency if that is even possible, for one may be tempted to press the "repeat" button too many times in order to experience and re-experience the stunning beauty of this riff. 'Down with the Sun' features a groovy-as-fuck chorus that would have even the most closed-minded, elitist "black metal warrior" bangin'. An exquisite tension is created as Aleksi graces the verses with an elegance that beautifully contrasts the aggression. 'Where the Last Wave Broke' starts off with a seriously jazzy riff that ushers you into the obvious gem of this song and arguably this album, the chorus. Jules Näveri (Profane Omen, Enemy Of The Sun) sings his heart out, perfectly vocalizing this utterly divine, ego-crushing melody as Niilo counterbalances it with his gritty yet creamy growls, all of this to which the lead guitar laments. Once again his excellency Aleksi of Keyboards graces the bridge with a simple yet hauntingly beautiful dance of the keys. As everything comes together for the outro one feels as though transported beyond the distress of the physical realm. This number is also in potential danger of being over-played due to the chorus being too good. It would rather befit some serious deep-gazing, moist-eyed lovemaking, methinks, as it is quite the heart-humbling experience. 'These Harrowing Years' features a more 'traditional' Finnic intro followed by a quick tease of heart-gripping doom during which I in fact catch myself rolling my eyes backwards in ecstasy. This is alternated with yet another superb Jules-chorus accompanied by a sweet bassline courtesy of Sir Niilo. This particular chorus might test one's comfort with one's own masculinity. For those secure it should go down as smoothly and pleasantly as a shot of (fruity) Finlandia. The outro of this number is marked by an anthemic lead which resonates to the very end. The two Villes keep their fingers busy on 'Against The Stream', an energetic, thrashing number with powerful, harmonized riffs that carry an underlying optimism. This one rocks out pure Insomnium-style. Again, beautiful chorus and sophisticated bridge. The piano outro makes a nice ending as it brings about a melancholy that elicits self-reflection. 'The Lay Of Autumn' has the soul-soothing acoustic atmospheres and 'Finnish' tunes one can expect from Insomnium. The layers of sound and ballad-like melody once again sung by Jules lends a warmth that reflects the title of the song. Sir Markus of Drums, typically solid yet "low-key" in execution, delights with a short but sweet 'improv' at 6:31, adding interest to the texture-laden medley of sounds. 'Into The Woods' is a thrashy number with jazzy harmonicized guitars throughout as the Villes display their mad shredding skills. Amidst the magnificent texture of sounds the lead sings his story, carrying a powerfully 'determined' feeling throughout the song. The Finnish term "sisu" comes to mind as I wonder if they are singing about the need to go on chopping for wood despite the fact they're about to pass out. If not, this certainly would be a good soundtrack for that. The feeling is incontestably "resilient". 'Weighed Down with Sorrow' starts off with a mournful Aleksi-intro with a 'vintagy' sound, that though melancholic still somehow carries an air of hope. The 'transition' into the actual "song"-part I felt was a bit disconnected, but as the song goes on any mild disagreeances quickly dissipate. This intro starts to work in its own way as the underlying melody soon makes itself heard. On a moderato canvas, the lead guitar sings a painfully beautiful song as the anguished growls reflect his sentiments. The emotional effect is potent and sure to bring even a stoic man to tears given the right conditions. This song made for a brilliant conclusion to an epic journey.

"Across The Dark" is jam-packed with stirring melodies, to-die-for riffs, catchy-as-hell hooks, and breathtaking choruses full of nuance. This album clearly demonstrates Insomnium's capabilities of juxtaposing beauty and aggression- all of which is unleashed in deliciously rich tones with a full, organic sound. With their expert manipulations of rhythm, knack for arrangement, 'tastefulness' in song-writing, and 'sensitivity' in execution, Insomnium has created a work that leaves very little room for criticism, and certainly no room for boredom. Every moment touches thee like the passionate thrust of a selfless lover, bringing you to your knees in aural ecstasy. "Across The Dark" will not only move you to tears but have you banging like an insatiable wild woman on top, so be sure to have lots of tissues and conditioner on hand. As I'm confident that nothing I listen to ever sucks, this album carries my highest recommendation!