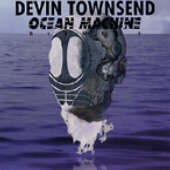 I love this CD. Ok I’ll admit it, I’m a sucker for great progressive metal and "Ocean Machine" delivers. Forget about Devin’s anger and Devin’s confusion, because this album doesn’t really show any signs of either, rather it's full of great head moving guitar licks and absolutely brilliant vocal lines. This album has a fantastic atmosphere to it, drawing you into it and not letting you go until you have listened to the whole thing from start to finish. It has everything I like about power metal, and more importantly, none of the parts I hate, offering a ‘window’ of sorts back to classic 80’s power metal without the gayness. (no homophobia intended)

Musically, Devin is a God. His ability to produce top quality music of varying genre’s on his own is unsurpassed. For a first time listener, you would assume this CD is from a band who’s been perfecting this style of metal/rock for years, but in reality it's just one skinny, balding guy from Canada who’s doing it all on his own…..and for the first time with this record!!!

I can find no flaws in this recording, the songs are solid, their structure classic and unbeatable. The guitars all sound fantastic, generally tuned down and with a more contemporary bottom-end filled sound (a far cry from the tinny 80’s sound), pumping out line after line of great ‘get the feeling’ type riffs. What can I say about the vocals? Those of you familiar with the man know just how versatile Devin is in this field and this demonstration is no exception. I think the key to Devin’s brilliance vocally is his ability to throw in the perfect backing vocal to add stunning texture to the main vocal lines, and with "Ocean Machine", he has done it to perfection. The drums are also noticeably different with "Ocean Machine". No longer based around speed, these patterns are almost pop-like, creating a whole new feel, and finally offering the listener a chance to tap along without developing some kind of cramp! The keyboards are less noticeable in this recording, but fill any holes left by the other instruments beautifully, making this recording an absolute sea of sound. (pardon the pun)

I’m not even going to bother trying to pick out a favourite track, because the I would not be doing this album justice by soloing any part of it. "Ocean Machine" is a whole made up of many parts…..as apposed to most CD’s which are many parts put together to create the whole. Brilliant.

Bottom Line: This is my absolute favourite vision of Devin’s to date. It has all the elements to please fans from White Lion to Fear Factory. Lets hope he decides to do something else along the same lines!!!