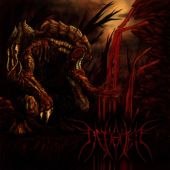 Austraillian metal has once again, hit the shores of North America like the Allies did in France on D-day in World War Two. ‘Down Under’ based Death Metal is a unruly sort of breed all of its own, and always it has been completely unashamed of itself and will never apologize for being that way. With that said, here comes Brisbane based DefameR. A perfect example of the Austraillian scene.

Musically DefameR are seriously complex music wise, yet the lyrics seems to spew forth like Sulphuric Acid to burn into the listener’s brain... the band clearly shows exactly what Death Metal is all about. They pummel you with lightning speed drums, intestine shaking bass riffs that seems to come from the centre of the earth while the vocals are spat at you with anger that is undescribable.

Songs like ‘Chorus Of Whispers’ and ‘The Black Obscene’ are on the surface so simple, but that is so misleading as every word is very complex as they drag you into a world that most might avoid. Musically, DefameR can sandblast their way through three feet of concrete without breaking a sweat, as their sheer power leaps from the CD with every last blasting beat.

They remind me sort of Floridian Death Metal pioneers Death, and to a lesser extent the skullcrushing Obituary... not musically mind you, but it is the feeling of just how far ahead of the pack they are in terms of their music. DefameR is a band that has that inexplicable quality that most bands only try to have... that is simply having sheer talent wrapped in barbed wire. Pretty cool, huh??