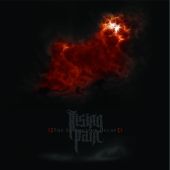 Type:
Release Date: 2009
Label: Open Grave Records
Genre: Thrash
1 Eyes Sewn Shut
2 Remnants
3 In The Face Of Death
4 The End Of Our Dying Days
5 Feel Less Alive
6 Am I Awake
7 Damage Is Done
8 A Matter Of Time (Instrumental)
9 The Essence Of Decay

Arizona, USA... as a state is pretty amazing place at the best of times... but music wise, it is more than simple amazing... it is quickly becoming a place known for great metal. There has been some very good metal acts coming out of the desert state in the last few years. One of the top unknown acts that now I need to skywrite about are from Mesa AZ. Please bow to... Rising Pain.

This is as good as metal gets anywhere where old and new clash and make a very evil spawn.. Mixing old school Thrash'n'Speed with the sonic devastation of the likes of the mighty Brazilian attack of Sepultura (Old) and even the sheer blast of Cannibal Corpse... then adding in some new twists while establishing that the musicianship was head and shoulder over anyone. They are slightly unpolished as of yet... but that is the final ingredient that makes Rising Pain as good as they are. You are not expecting something like this... but you will be more than impressed when it hits you.

Rising Pain as a band really does write some massive songs, while steering away from the cement mixer type of crap that most bands try to pass off as being metal. One listen to the track ‘Eyes Sewn Shut’ or the neck breaking ‘In The Face Of Death’... you cannot dispute that this band has a major future. This band will rip off the genitals of anyone who is dumb enough to stand in the way of their domination, because this is the prime example of great Metal.

To put it as simply as I can for you all... Rising Pain are so good in so many ways that they could very well be the next real deal in metal. I was wondering who would have the balls and strength that it takes to wrestle the Metal Crown from the mighty Slayer... I might go out on a limb and make a serious prediction here... I see that it is more than just possible that Rising Pain could do it.

Do I have to shout it out loud here? Rising Pain is a band that is just that damned good!! One listen and it will be clear... and you will be rising in pain from the start of the CD to the end, (but it is in the good kind of pain).