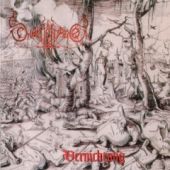 Swiss Black Metallists have a full album now for the pure purpose of scaring unwitting angels out of the heavens and will be terrorizing innocent little children who have forgotten that things still go ‘bump’ in the night. This album can do this, and much more.

With their Demo still fresh in my head, and a new album right here... it seems like the Swiss Satan four piece seemed to be determined to be heard by every last member of the Darkened Metal masses worldwide. With the release of this, their first full album called "Vernitchtung", it really looks like they have taken a really huge step forward musically, lyrically and all ways. This is a band that is truly coming of age.

Songs like the soul crushing ‘Judas’ make the hairs on the back of your neck stand up while the faith killing anthem called ‘Anti-Christ’ shows that they have stayed true to what they had set out to be and made it so much better. With the record production so much better and stronger than what it had been on their Demo(called "Krieg"), the band as a whole has become one that will be noticed right off the bat. They have made a very worth while album!

Call the Coven to gather around the bonfire beside the waters of darkness, raise the horns high in the night’s sky to start the dark mass in full... Schattenreich have made a triumphant noise to the fires of Hell. The Black Mass now has it own Hymns for the unholy... all done with loving oppression.