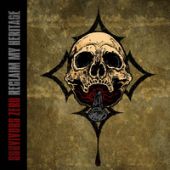 A EP that has only two songs on it better be damned good right off the bat. There is no wiggle room for any sort of musical blunder when any band puts out a promotional EP that is this short. A bad song could quickly become something akin to career suicide. This is exactly the tightrope that Finnish Death Merchants Survivors Zero are trying to walk... a fine line that is between failure and success.

Using steel wool as toilet paper when you have bleeding hemorrhiods, is the perfect description of Death Metal... and this two track CD is true Death Metal for true Death Metallers. Survivors Zero do deliver the most brutal and sonically vicious melodies I have ever came across in awhile, melodies which pulverizes anything that happens to be in their way... but yet the music is actually catchy as well. It is way to scary to think that this band has both of these traits in their possession.

Sami Jamsen (Normally a Producer) is the one here who stepped out from behind the mixer-board and out to play the music he had been hearing in his mind for a rather long time... he tried a few incarnations of the band, sadly members came and went in the attempt. Settling the line-up to have Shredder extortionary Janni Luttinen (Ex-The Scourer) on guitars, Thunder god Tapio Wilska(Ex-Finntroll) on Bass, Infamous growler Tommi Virranta(Ex-Deathchain) and Skin pounder Reima Kellokoski on Drums (Ex-Impaled Nazarene) he had success. Such a potent line up... talent abounds everywhere. Clearly as the dust settles... Survivors Zero are a force to be reckoned with.

They are said to be releasing a full length album, or perhaps they have already released it at the time I am not sure (Album tentatively called CMXCIX). I really hope that I get it to review. This two tracker EP really has wet my appetite for more from this Death Metal Supergroup ... now I need the main course. Anyone got a metal bib for the up and coming feasting? I am drooling already... bring on the main course.

Musicianship: 9
Atmosphere: 7.5 (Having only two tracks to offer up really lowers this mark)
Production: 9
Originality: 8
Overall: 9