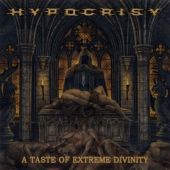 A strong production quality is not surprising, diving into the musical components one would think that Hypocrisy has done just what they have, which is to be among the realm of melodic death metal output heirs. This album is solid, the music ever flowing gist of pure crunch distortion alongside some heavy drums and screaming from Peter. From the first song to the last, it's never really letting up in the intensity factor. Pure aggression and great melodies not to mention that the tempos are mostly rhythm guitar-oriented creativity galore!

Nothing here really to dislike by me, I think it's one of Hypocrisy's finest outputs since they changed from death metal to a more melodic sound. I don't really identify with the lyrics, but the music is played out so well and the vocals never get boring. What we have here is melodic death domination! The naysayers may tell you differently, but from my aspect, I never got sick of playing this one. In actuality, it's very complex in songwriting skills, more so than their newer album that was released last year called End of Disclosure.

There are so many tempo changes here, but it's mostly in the vein of fast guitar riffing bolting out some venom in their creation and quite admirable to say the least. I particularly love the gallops and ultra-fast picking Peter explodes on here. I only have very good things to say about this one. The music is filled with overtures that devastate the listener and destroy your speakers. There's a combination of screaming out hatred alongside low bellowing pieces that give you more variety. It's amazing regarding the guitar/drum work here.

If you're a big fan of melodic death metal, don't pass this one up. YouTube some songs to see where you can hear that crisp production sound and guitar, intensity in the musical quality, and screaming alongside it. An excellent effort from the band as a whole, not much let up in madness, Peter has shown listeners something that is really amusing not to mention original. His songwriting quality is superb here even though I'm not much into what he writes about. Pick this one up if you're into their "newer" sound and I doubt there will be any dislike!