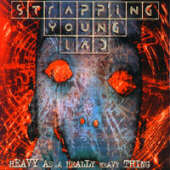 While not as intense or as musically stimulating as its followup City, this cd is still one hell of a metal rollercoaster ride! Devin Townsend is most definetly a layering and musical genious the way all his songs and samples fit together and flow in an insane yet well thought out manner.

After getting past the fairly humorous title, 'Heavy As A Really Thing', you realize that there could not have been a more perfect description for this record than that one right there. The vocals, guitars, bass, drums, and effects all interact together to create the intense mix of industry and pure sonic metallic rage. The music, at times, takes a backseat to noise, but some songs shine through such as track number two intitled 'In The Rainy Season'. One has not witnessed pure musical insanity until they have heard this song. The first time I heard this song my faw dropped in utter awe of the layering, unique structure, and weird ass vocals making it sound like there was over 100 or something vocalists.

Of course no Devin Townsend project is without its twisted sense of humor. The naked man with a bag over his body and the cartoon character giving the thumps up on the toilet do little to prepare you for the last track on this disc. 'Satan's Ice Cream Truck' is a little glimpse into what is going on inside the head of Mr. Townsend. It is a perfect way to end a disc of this nature. All Devin nuts should already have this disc, but for all you other insane metalheads out there, you definetly do not want to miss this record, nor the followup, "City".

Bottom Line: Another good solid intense release from Hevy Devy. Not as intense as "City", but intense nonetheless!