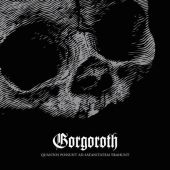 After the solid yet slightly underwhelming Ad Majorem Sathanas Gloriam, I kind of forgot about Gorgoroth on purpose. I put them in a dark corner of my mind and let them stay there. While it was a decent effort with some memorable moments (the highlight was having Frost on drums), I have never been a fan of King and Gaahl’s songwriting. In fact, I have never been a fan of King or Gaahl, period. So once Infernus had settled the business over the Gorgoroth name, my attention was recaptured.

With Quantos Possunt ad Satanitatem Trahunt, we see Gorgoroth finally back into the hands of its rightful owner - Infernus. And what an album. I wouldn’t be surprised in the least if I knew that he was willfully holding back on this material just so King and Gaahl couldn’t be a part of it. And I would not blame him.

For “Quantus”, we see some significant changes in the Gorgoroth line up. Obviously, King and Gaahl are gone, never to return. On vocals, we see the return of Pest. On bass, we have the legendary Frank Watkins (RIP) from Obituary. And on drums, we see the addition of a virtually unknown drummer - Tomas Asklund.

From the very first ripping moments of “Aneuthanasia” we can clearly hear a tighter, more focused Gorgoroth. The song writing is strong throughout the entire album, with hooks that will keep you coming back for more. But besides the unnaturally strong song writing, what makes this album so important is that it captures the essence of what Gorgoroth is. Forget about those albums with King and Gaahl. This is really what the band represents, and it sounds like Infernus waited ten years to make this happen. All the built-up rage, anger, tension and passion is released, in an almost poetic way.

I’ve heard a lot of people complain about the sound on this album, of it being too clean, of the drums being too clicky, but honestly, I do not have any problems with it. I think the production and sound of this album fits the music perfectly. And that’s one thing that should always be considered carefully when making an album - if the sound is matching up with the songs. On this offering, I believe it truly does. The drums do not bother me and are not too high up on the mix, the guitars cut through just enough without being over powering, and the vocals are exactly panned the way they should be. So rather than complaining about it, I personally think this is one of the best sounding Gorgoroth albums ever made.

Pest puts in quite a remarkable performance, but that shouldn’t come as a surprise to anyone. It’s just a shame that he is not around anymore and was kicked a few years after the release of this album. Both Tomas and Frank put in solid performances, but what steals the show are without a doubt, the carnage unleashed by Infernus. Quite possibly his best performance, he masterfully weaves his riffs in and out of your body, transitioning the lighting fast picking attacks with the slower, doom laden riffs with the utmost ease and conviction. “Rebirth” is a fine example of some of his slower guitar work - and it’s not easy to keep the listener interested with a guitar part that honestly, doesn’t move around too much. But he manages to do it all the same, encapsulating the listener in a vortex of atmosphere that wouldn’t sound out of place on early 90’s black metal releases.

“Satan-Prometheus” may not be just the best track on this album, but the best track in Gorgoroth history. Primal to the bone, and with very little in terms of mercy - it is a stunning piece of metal and art that should not be overlooked - fan of black metal or not. Pest’s vocals are chilling throughout, and the atmosphere and build of this track is on par with some of the best metal I have ever heard. The riffs slash and gear you towards the songs ending in such a spectacular fashion that I can’t stop myself from nodding a small nod whenever it raises it’s broken and blackened angelic wings. It sounds like a thousand years of torment is finally being unleashed, with the skies ripping themselves open, the seas draining all life, the sun extinguishing its power.

“See the hordes ascend
Crushing the face of god”

Essential, I believe, is the word for this masterpiece.