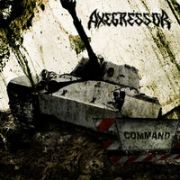 "Command"! Finnish Thrash metallers Axegressor have released a debut album of some seriously thrash-tastic shit here. Opening track ‘Born Of Pain, Bred With Fear’ sets the stage for destruction. Winds cry and machinery murmurs before the dam is broken and the deluge of liquid steel that is Axegressor takes over. "Command"s tempo moves from a heavy chug to warp speed by the second track ‘Damage Inked’.
The sound of Axegressor can be described as traditional as (specifically teutonic) Thrash gets. In other words, chaos at the speed of your pulse rate after chugging the syrupy remains of boiled down Monster remixed into a Full Throttle.
Johnny ‘Nuclear Winter’s (don’t you just love stage names?) sandpaper throat mixed with bass-heavy mastering is guaranteed to drown out any noise coming from your surrounding environment. The plentiful hooks and catchy nature of songs such as ‘Not’ and ‘Servants’ will also keep your ear in check. There isn’t anything "Command" has to offer that hasn’t been done already, previously or before. So, it may not appeal to those of very strictly old school taste, you’ve heard it before. But thrash fans of yesteryear and this year will find Axegressor worth their while.