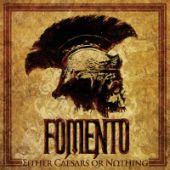 Italian metal has been more than just pretty good over the last few years that I have been exploring it... but sometimes the speeding car of metal hits a serious speed bump and crashes in flames. I have found that speed bump causing crash in the name of Fomento.

Musically, the band is pretty good and showing the musicality that is so amazing to be hearing. The guitarists are well versed, and seem to know how to shred (and when to keep it simple as well)... but all good things have a bad side. In say that, the bad side is the bad recording and the uninspired vocals that drag down what could be a very great album into the abyss of being crappy as hell.

Let me be so clear on what I am saying... the production on this album was more than just horrid... it was really bad. Guitars were not full and flowing through the album, the drums sounded almost like they were being played on a child’s toy set because of how tinny and too far back in the mix they were. Going from bad to worse, the vocals are simply bad in every extent of the meaning... It made me think that Lemmy (of Motorhead fame) is an opera singer compared to this man’s garbled and very non-talented noises.

Here is what I think in an nutshell the band needs to do to have a shot of becoming a good band. First off, Fomento fires their producer and send him packing, buy the drummer a proper kit that sounds like an adult’s kit and then go out and rustle up a better vocalist (Make this man one a roadie or something... and away from the microphone).

I would like to hear the band again, but not with this line up or production values . Either "Caesars Or Nothing" was so damned painful to listen to with such a bad vocalist set into a garbage recorded album. I have heard many badly recorded albums... this is almost at the top of that list.