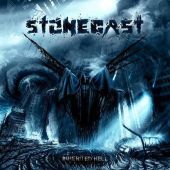 Searching around to the best of my abilities, I have not found a huge amount of information on the band that has named themselves Stonecast... yet I seemed to be really intrigued without any real basis to it. Metal from France is cool, but still pretty much unheard over here in North America... perhaps that is why I have had a bit of a time finding things about them out

What they sound like, is a little bit of an intriguing sort of thing... a hodgepodge that seems to come together seamlessly into one amazing package. They have some glorious Thrash roots that they base their sound on, yet there is a very clear hint of then having both some Death and some clearly Classic metal that is all fuelled with an adrenalin based attitude center that delivers some very good metal.

Most of the album is a straight out mega explosion of power and talent, but one certain track in particular really ends up standing out the most. 'Stonemachine' gets into your very mind and does not let go. It is as catchy as it is heavy, making it so great to hear. Other tracks such as 'A.D.A.M.' and 'Ethereal Whispers...' are also so strong, yet show a young band that has a big future ahead of them.

They are young, and the recording could have been done better, but thankfully because they are very good in both song structures and how they play... helps out overlooking this little speedbump of the project. Stonecast are a band that will be heard from at a later date... I hope that they can get better backing than what they have... and a better production team as well. Talent like this needs to be promoted heavily... and made to be heard.