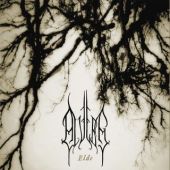 Interesting is a term used way too much at the moment, by everyone it seems... but at this point this certain term really does fit as I listen to Norway’s Alverg. Truly, no other word fits.

This is Norwegian Black Metal at it’s most brutal best, stepped up a couple of notches as well. Sounding sort of a cross between Bathory (early), some aspects of Venom and having that dank sort if feel like the mighty Emperor had early on... this one man band seemed to have capture the true meaning of what it is to be evil. Dark as the River Styx, sinister as a demon’s heart and as unholy as you could get...this is only partially how to accurately describe the man’s devilish vision.

Most of the lyrics are not in English (except for the last track), but with the darkened feel of the songs that comes through... who damn cares? The songs still give off satanic forces better than anyone does at the moment. The whole album breathes with the searing pain of hellfire as it forces you into the ferryman’s boat for the long dark ride to the shores of hell itself.

The record company has reported on their site that Alverg was signed to do three album for them. If this is the leading precursor to what this one man act has to offer up... I wait with horns held aloft until they come for with another album. This release will be hard to top, I think... but if they end up doing it will be darkly amazing!