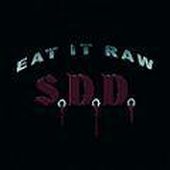 Type:
Release Date: 2009
Label: Self Released
Genre: Rock
1 Drink With Us
2 Another Pie
3 King Is Dead
4 Voice Behind

Rock and metal sometimes need to strip itself down and simplify itself to find the fun that has been misplaced. S.D.D. is a band that does that, and reminds us not to take ourselves too seriously.

In a nutshell, S.D.D. is primarily a old school styled Punk band (like G.B.H. and the Dead Kennedys and even D.O.A.Motorhead inspired heaviness with humour and the willingness to have fun with everything they do. The group will never win in the musicianship department, nor will they be seen as breaking any sort of musical ground either... the band is your simple, basic sort of beer swilling, hard driving in your face heavy band that everyone can enjoy.

They are a band that brings out and then inspires the true essence of Rock and Roll.... Headbangers, punks, skaters and anyone who loves rebellion and intensity while never forgetting to have some plain fun can all join in under the S.D.D. banner. I for one love the album for the sheer pleasure it brings to this old thrasher’s ears.

Don’t expect a musically diverse sort of opus here, or anything close to seeming to be progressive... if you want something purely rocking and do not want any social epiphanies or blistering technical guitars that shred your ears... S.D.D. will be the album that people need to have. It is simple and good... sort of like Pizza and Beer... not a five star meal, but it is so good!