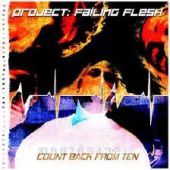 This album is somewhat of an oddity. It has a mechanical sound that is relatively straightforward, but certainly weird. The band has similarities to unsual bands like Voivod or Gojira that have an abnormal take on the metal genre. There is a nod to the outfit Prong as well, who wrote one of the more interesting songs here, 'Irrelevant Thoughts', and they have a similar industrial beat.

Indeed, there are a lot of abrupt musings on this disc and though they’re sometimes interesting, the band could have pushed into further areas of innovation. The second track 'White Light Response' seems to establish the band’s unique take on metal reasonably well and songs like 'The Potential To…' cement the kind of style the band are going for effectively. Percussion plays a large role in these songs with trance like beats that are performed. At times the songs are neat and maintain interest, but at others the album is slightly on the boring side. Project: Failing Flesh display some groove and rhythm at times, but at others the songs push along at a mundane pace.

The band should try to put as many interesting ideas into their song as possible because they are going for an oddball style anyways. Sometimes the music here is too conservative and thus not as interesting as it could be. The music is tight enough and the vocals are passable, if a little rough around the edges. Overall, the music of Project: Failing Flesh is competent, but underwhelming. If the band wants to push their music in a unique direction, they should push themselves even further. Listeners looking for obtuse metal compositions might find something to like here, however.