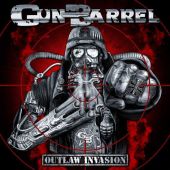 Germany’s version of straight ahead metal in the vein of such notables as Motorhead, HellYeah and Motley Crue is finally here... and they seemed intent on kicking some real major ass. Gun Barrel has a bead on the world of metal in their sights, and they are not adverse to pulling the damned trigger to kill all of the false metal that seems to crawl out from under some slimy rock.

These guys are simply described as a liquor soaked, down and dirty in-your-face biker styled Classic Metal at it’s simplistic finest. There is no Progressive musical lines lilting away, no Black Metal masses being called for Satan to rise from hell to take over the world or is it not some fretboard shredding metal here... what you have here are just a collection of thirteen songs that can be the soundtrack to drinking a case of cold beers, riding some really chopped out Hogs and having a hell of a good time while stealing your friend’s girlfriend in the process.

The music is simple, but delivered with great amount of talent, power and heart. They just write songs that express who they are without any fluff to it while making some of the most honest and pure metal that has been put out in a very long time. This stuff is exactly the style that attracted me into metal in the first place. Gun Barrel is at its purest... have some very infectious music that just makes you want to sit back with a cold beer in one had, and a smoke in the other and just relax.

Gotta love this type of metal... it delivers a soul wrenching attack of pure Rock'and'Roll attitude matched up withy the fury of metal. This album is what was needed to be heard in metal today... some plain and honest stripped down metal madness that was made for the unabashed and perverted fun of it all.

I’m thinking of cracking a frosty beer open right away, and hitting the play button on my CD player once again. They do not get me confused or make me wonder what the hell they are doing... they so deliciously remind me of the many reasons that I love metal.