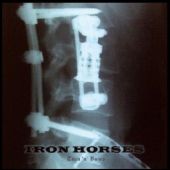 Iron Horses band name conjures up many images in my quite fertile mind. One of the favourites are of a long line of Harley Davidson Panheads rolling down the highways in a smoke spewing pack, motors thrumming away in a cacophony of pure roaring power as the leather clad riders sombrely pilot their machines along... Ah, that is such a great image, and a flood of pure energy as I let it sit in my head for a moment. Now...on to the task at hand, is this German band as good as that image was?

The band is a conglomeration of straight ahead metal music and some anger-meets-extreme-angst driven Hard Rock that is not really new... but how it is put all together it's actually almost seems to be a new and improved styling of fuck you metal has never been as damned good. The band drips, oozes and just exudes that sort of pure attitude that comes with just being who you are.

These guys are the real deal when it comes to straight ahead music. They mix the styles of such great acts as AC/DC, Ted Nugent and even Priestess with the power of Motorhead and even some Rose Tattoo, yet they have seemed to have made sure that their music is purely their own. They almost out sleaze Motley Crue here... and that is a task that is very hard to do, yet they have!!

If your looking for some serious Shred Metal or some Progressive sort of angles to your musical diet, go elsewhere... but if you are looking for music with loads of attitude, honesty and some seriously large set of gonads... then Iron Horses are the band for you. They do not apologize for who they are, and the seem to want to stomp on those unfortunate people that try to get them to not be who they are.

It seems as the down and dirty type of metal have a new leader come to the forefront, and they will keep that crown for a long time.