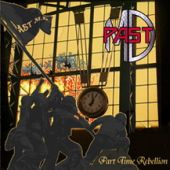 
Old school metal rears its head and trumpets its return with a shit load of attitude... God is this good. Past M.D. is a band that not only categorizes this classic sound, but they are a band that have kept the very basis of metal music very fresh as they also added in some major muscle to it as well.

Their bio says that they are a rebirth of an old metal band from years past called Midnight Darkness, a band that I remember from imports coming into Canada by way of a speciality record store we had back in the day... but sadly I don’t remember any of the material of MD. I am sort of glad I don’t, because this release by Past M.D. aptly called "Live Rebellion" can be rated on its merits alone.

The disk has five well crafted, well thought out tracks that knocked me right off of my feet and send me into metal nirvana (No, not the damn band... the feeling). Each song is a lesson of what metal was, is and what it will always be It is not Death, Power, Thrash or any other sub-genes of metal you could think up... in fact Past M.D. is as basic as you can get. It is pure and untainted metal. One listen to tracks like 'No Time For A Heartbreak' or the so catchy 'L.A Prisoner', you will see what real metal is.

They remind me of their legendary countrymen called the Scorpions... and even Warlock in the way also as they make sure that they are so pure in what they do and put out the best music they can possibly have made. Past M.D. have stayed perfectly true to their metallic roots throughout it seems, now giving us some really classy metal to chew on. I must thank them for that.