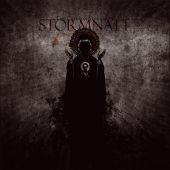 Stormnatt have managed to take what I like to call ‘Happy Black Metal Moments’ and managed to turn them into a full length album titled "The Crimson Sacrament". Some readers may ask ‘what is this happy black metal you speak of’? And I will tell you. HBMMs are compromised of a riff or a keyboard chorus with a catchy, melodic and happy nature (i.e. if you took that set of notes out of metal context it would appeal to a broader range of individuals). A great example would be Inquisitions "The Initiation".

Do note that this does not affect a band’s awesomeness. HBMMs can actually increase awesomeness levels up to 34.6%! However these are to be used sparingly, as it is a great part of their charm. Tease the audience rather than inundate it. Stormnatt missed that small detail.

These Austrians found a small selection of hooks and made the same grave mistake their catchy black metal brethren Goatwhore did in abusing the fuck out of them. This then created an album that was difficult to distinguish between the tracks despite its catchiness. The fact that the opening was Gregorian chant followed by an abrupt wall of noise didn’t help either. I believe that has been done, let me think… 290,843,905 times already.

It is easy to bob your head to this music, and I can’t help but think with the nature of the majority of Black Metal listeners today that is the only reason these guys have any fan base. "The Crimson Sacrament" it’s not bad and it’s not good, it’s just who cares.