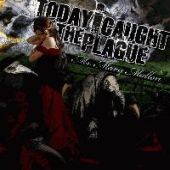 If the plague is tasteless Progressive Metalcore from Ontario, then I have caught it.

Today I Caught the Plague’s "Ms. Mary Mallon" is an irksome combo of angst-y screams and mediocre female vocals having tea over riff puree. The songs meld in to one another, which isn’t a bad thing in itself, but it would help to not have that happen being it’s difficult to gage a difference between them all.

I will say that the guys can play their instruments, but the vocals are distractingly louder than everything else going on, of which there is a lot. TICP is trying to do something different here and they almost succeed. The music Almost makes me think ‘Avant garde’ in its total disregard for smooth transitions, bridges or pretty much anything other than the red light green light jumps between an acoustic female vocal combo and heavy frenzied madness. It’s almost interesting, but ultimately falls flat because this dance between the never ceases, ever.

The final track ‘Dead Girls Don’t Smile’ is the most three dimensional track on the album. The male vocals become clean and complement what everyone else is doing. A folkish touch is added with some stomp clap rhythm, and the ending fades with more interesting and vaguely recognizable sounds. The use of the aforementioned created something I could look back on and specifically recall from "Ms. Mary Mallon". If more of what happened in the final track took place elsewhere on "Ms. Mary Mallon" I would deem it OK. But it didn’t. So if you like uh, core…stuff; go buy it, otherwise back away away away….