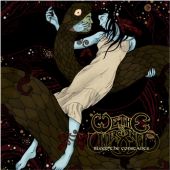 I am not too much for the style that We, The Undersigned are doing. The broad term that has become Nu-Metal is not my cup of tea, even though it is a strong movement and is gaining speed... yet I am one who loves metal in almost every form. I am willing to give every band I end up getting a fair shot. Here it goes.

Hailing from Canada, We, the Undersigned explodes out with a very noticeable difference on the newer metal coming out. It does have that unmistakable Nu-Metal feel, not to mention the Scream-o metal factor to it in some respects... but all of this pigeonholing has to stop because this band is so much more. It seems as if the band has stolen their crazy older uncle’s metal collection and has learned from it all, while still listening to what is new out there.

Technically sound yet insane riffs fire spew from the speakers like a flamethrower, while the rhythm end of things really does give the band a hell of an engine to work with. They remind me of many bands that I do not like, yet the band has something that others do not have... melodies. It seems that they have taken old metal, mixed it with the new Scream-o stuff and has really made a difference here.

I applaud the band, but I feel that the band has not fully developed what they are trying to create in the way of originality. This is a start that is impressive, but whatever... it is just good to listen to.