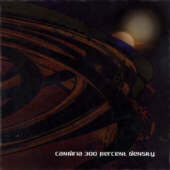 As some of you regulars may know, I’m all for change and doing things differently and being original. Therefore, based on their reputation I was really looking forward to hearing Candiria for the first time.

I don’t quite know how else to say this, but 300 Percent Density was lame.

Talk about a major dissappointment! I heard all this good stuff about how they blend in various music styles including jazz and hip-hop and that they’re great musicians and the like. What people are saying about the jazz influence is ridiculous; yes, they have some influence, no they don’t do it well. Try listening to Mr. Bungle, that’s a jazz influence done well. About the hip-hop thing, we all know that it’s the current fad with nu-metal, and this isn’t like nu-metal, this is just silly; these guys move from some form of death thrash to a completely hip-hop/rap song, there is no blending, it’s choppy and it just happens suddenly. Here’s what seems like Candiria’s basic formula: it’s a thrash song, it’s a rap song, it’s a death song, it’s a rap song, it’s a thrash song with a slightly jazz influenced rhythm, it’s a rap song.

Understand that I’m not ripping on this because of the rap/hip-hop elements at all. I was hoping they could pull it off really well. We haven’t heard anything good in that area since early Rage Against The Machine.

I really found very little value in this disc. Some may like it for the sake of being different, but ultimately it isn’t any different than a few varying genres. There’s nothing new here and the fact that one band is doing it and calling it unique irks me because it’s just a stupid mask for an unfocused vision.

Bottom Line: I have no interest in poorly arranged genre mixing. I give them a couple of claps for an attempt at originality, but a large gaseous plume from my ass for failing miserably.