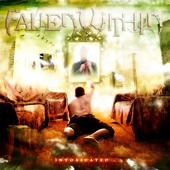 Fairly straightforward Melodic Death metal is offered here. The rhythms are catchy, yet distinctive and the vocals are abrasive and straight to the point. Some harsh parts are to be found amongst the melody to add an extra dimension to their approach. The band adds things like little bleeps for interest as well. All in all, the type of style isn’t incredibly original, but is done effectively enough to catch your attention. I would say the band has an accessible tone, but combines the best of Melodic Death metal with their own thoughts into a good combination.

There isn’t anything incredibly unique here which may be seen as a downside to the work. Instead the listener tries to venture into their fairly straight up style and enjoy it as such. Fallen Within is able to craft an addictive brand of metal even if it isn’t the most creative thing you’ve ever heard. The ability to make things appealing is the high point of their approach easily and shows through in the accessible nature of their music. Some people may tire of this typical Melodic Death metal style, but if they don’t this is another good work to add to their collections. It doesn’t have as much nods to older classic At The Gates or In Flames like some Melo-death, but manages to bring its own impact to the table and succeeds moderately well on its own regard.

People looking for just more in a crowded genre should find enough to like here. "Intoxicated" is a good album that could have been great with a more ingenious approach.