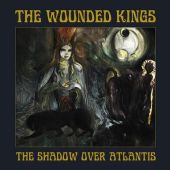 Type: Full-Length
Release Date: 2010
Label: I Hate Records
Genre: Doom
1 The Swirling Mist
2 Baptism Of Atlantis
3 Into The Ocean's Abyss
4 The Sons Of Belial
5 Deathless Echo
6 Invocation Of The Ancients

Foreboding guitars take the listener through the cosmos to the murky realm of Atlantis. George Birch’s (one of two founding members) ominous vocal style rides the coattails of Messiah Marcolin, but do not taking center stage in the same way. There’s a balance throughout this album between the vocals and the instruments in taking the main stage, helping prevent The Wounded Kings from falling face-first into the muddy tracks of their influences. Their gimpy-turtle tempo also falls out of pattern with earlier doom acts; really The Wounded Kings are picking up the scepter of funereal heaviness that Reverend Bizarre put down. Sounds outside of guitar, bass and drums are kept at the bare minimum, including only Steve Mills (the other founder) on piano. Besides cosmic or psychedelic I would also use the word stonerrrific to describe some of what’s going on with "The Shadow Over Atlantis" particularly with the second track ‘Baptism Of Atlantis,’ which I thought would be more funeral doomy in sound based on the subject, because we all know how that turned out, but it just so happens to be one of the less-depressing tracks of the album.

The ‘sales information’ from the label describes "The Shadow Over Atlantis" as being a warning cry to folks today to not repeat what the citizens of Atlantis did by abandoning their spiritual lives. I need not tell the story of what happened to them for you to get The Wounded King’s point. I can’t say I read that idea specifically from the music or the lyrics, but certainly the image of a bent man on a soapbox came to my mind once the vocals let loose. So they’re getting there but I’d suggest a Blakean manifesto to get beyond the purely narrative impression. So two ideas to walk away with here: 1.) Doomsters-go buy this album 2.) We’re all Doomed.