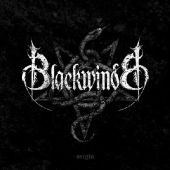 The so-called true black metal has a big advantage - experiments are scorned. Therefore, you always get what you have expected. The releases of Blackwinds mark no exception in this respect. The booklet shows two corpse painted, heavily armed warriors in the forest - that's how it should or even must be. Speaking of formalities, Origin might be considered as an EP, but the playtime of 37 minutes makes it easy to take it as a full-length as well. Moreover, it doesn't matter that the album consists of an EP and four unreleased songs - both parts coalesce with each other and form a strong, monolithic unit. The first thing I notice is that the seven songs don't lack substance. They are cleverly arranged with the effect that the variations in pace don't hurt the misanthropic force of the compositions. But it also gets quickly clear that Blackwindsdoes not have the prowess to mix the well-known, more or less standardized black metal approach with a touch of individuality. That's no big thing, nevertheless, the nuances that separate outstanding albums from simply good works are missing.

Let's speak about the temperature. If "Under a Funeral Moon" demonstrates minus 30 degrees Celsius and "Enthrone Darkness Triumphant" is around the freezing point, these seven ragers can be seen at minus 15 degrees. The icy guitars combine coldness with spectral vibrations and the result sounds pretty impressive. It is slightly confusing that the best track, the short "The Watchers" marks the only piece which was not originally written by the band itself. However, it fits the musical context excellently and its majestic, yet gruesome guitar lines seem to herald the beginning of a new era of evil. Even though this highlight remains untouched, the other tracks do not completely stand in the shadow of this song. Their similar approach, the dominance of the merciless guitars and the raw, demonic and sometimes slightly hysterical vocals shape the entire output. The general velocity is high, acoustic intermezzos do not figure. Only the pure doctrine is permitted.

And so, the band rushes through the endless autumnal Scandinavian forests while avoiding any kind of fillers as well as an overdose of sequences that keep sticking in the listener's mind. Of course, this is an enjoyable album, but it also doesn't wonder that it did not receive broad attention. To be immune against major flaws is fine, but this alone is not enough to forge a classic. Nevertheless, the material reflects the spirituality of the fascinating genre and both the typical black metal poetry ("Enter my world, enter death...") and the generic sound support its efficiency. Having said that, my recommendation is logical. Fans of Scandinavian black metal, especially those who like to listen to bands such as Setherial, have not much to fear when it comes to this record.