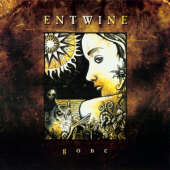 I guess it was just a question of time as to when the first HIM would clones invade the music industry; Entwine’s “Gone” answers that question and brings quite interesting version of love metal, gothic rock or however you want to call it. Although this album doesn’t bring anything new that wasn’t already done, all gothic fans should be more than happy with this release cause it has all best elements of this genre and it’s destined to make it big. It already stormed the homeland (Finland) charts.

As with most gothic rock releases, “Gone” doesn’t need many listening sessions to become addictive. Almost every track on this CD can become a hit single where poppy melodies, doomy guitar riffs and romantic lyrics create a very pleasant and relaxing atmosphere.

The true element that separates Entwine from their Finnish competition is new vocalist Mika Tauriainen and to tell you the truth I’m not sure if it’s for worse or for the better... Mike’s voice is much colder than Vile’s (HIM) which to some people can act as advantage. It doesn’t mean he just unemotionally sings the lyric lines but a larger voice range and deeper and warmer sound seem to me as a better fit to this type of music. What satisfies me the most is musical side of “Gone”, Entwine still knows for what guitars and drums were made and treat us with almost unstoppable array of very cool and at times even heavy riffs including double bass on ‘New Dawn’.

Therefore the aforementioned ‘New Down’, ‘Snow White Suicide’, ‘Thru the Darkness’ and more complex ‘Blood of Your Soul’ have to be my favorite tracks. If they could drop those exact sounding HIM-ish ballads like ‘Closer (My Love)’ or ‘Grace’ they could kick some serious gothic ass.

Bottom Line: First class gothic metal album and with the right promotion Entwine’s “Gone” can be their breakthrough release. Whoever holds this type of music as a favorite genre will surely not be disappointed.