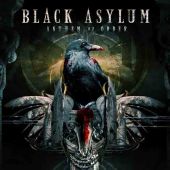 I cant believe that Black Asylum has not been found on my radar at any time here, because I am known for finding those unknown quantities in the world of Metal. With frantic yet impressive guitars, anger filled vocals and a bass sound that is so amazing... I actually have missed even hearing about them. Humm... gotta change that right now...

Australia has come out of nowhere and slammed my head again with a band that is beyond the scope of being awesome. Black Asylum is one of those rare breeds of metallers that has such a unique blend of metal that ends up sounding so fresh but still blows your mind. From the frantic sides of Nu-metal the incorporated the undeniable heaviness of Death, the near uncontrolled melodies of Thrash and even add into it some real technical playing like in Shred Metal... they combine it all and come up with what I call a ‘Controlled Chaotic Juggernaut Of Metal’. Long name for a band that has made a big impression on me.

The entire EP is more than worth a listen, each part of it is amazing but it is the first track thunderous vibe that brings you in. You get instantly some unabashed fury, chainsaw heavy power guitars and all with the unmistakable passion that goes through it all, melds together with their unmistakable anthemic lyrical ideas to make you want more. The recording seems to be great, but I want to see the level of everything kicked up a notch or two... some of the songs seem to have that ‘muddy’ feeling a time or two - but thankfully that does not detract any from the music.

Black Asylum really does sound like a good bottle of Whiskey or a well brewed keg of beer tastes, they can give you so much pleasure... best thing though is you don’t have to worry about major hangovers. Pick up the album, pour yourself a shot and decide for yourself.