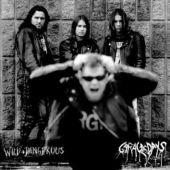 The Austrian band known as Garagedays second release called "Wild And Dangerous" has arrived in my hot hands... and continues where the first EP had left off. True to the bands fundamental metallic attitudes, it is a album that is simple and strong yett very effective in what they do.

Reminding me a whole lot on this album like Canadian metal legends Anvil along with many other bands from the 80's, this band shows that simple is more often than not the most effective way to rock. Garagedays don’t fill your mind with endless fret burning guitar lines or some weird ethereal lilts of keyboards... they are straight ahead and powerful metal that is just simple fun. Ten tracks of fun, to be exact, ten!

The songs are very simple, yet well crafted in every way. The music they deliver is heavy and full of all sorts of melodies and hooks that stick in your mind while the bands basic philosophy with life is clear.... just to have fun, and blow your mind away as well. The album here is the thing to gather up all of your friends with one Saturday afternoon, tapping a cold keg of good strong beer while turning up the stereo up to ten to see if the speakers could actually survive the pushing.

As I have said once, and now needing to say it again... No great mystery here to what the Austrian bangers are... Garagedays is just four simple thrashers that are out to make some great music that means something to them, all the while giving it to the world with a smile and a raised stein filled with cold beer and have some fun in doing so. Somehow right now, I feel like brothers to them. Pass the beers, bros!