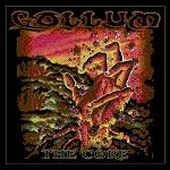 Mid range soaking, stoner appropriate, punked out, noise splattered, southern metal???? Experiments observed by an audience with the attention span of a ten year old, undiagnosed, hyperactive, prepubescent youth bent on a loud anti-conformity outlook. Gollum bring a fresh whiskey soaked sense of groove and noise to a format nearly gone stagnant. So many textures caught within very neccesary time constraints, and done with an absolute sense of newness. Noise addicts will find themselves like kids in a candy store drooling at the window.

The rhythm section here is what glues this whole mass of ideas into a cogent structure. Bridging the seams of the rusty bass heavy structure gleams a mid frequency grind of locusts which the guitarist shellacks the walls of ones' ear. Key noise rises politely and in complementary style all about, never overdone; just the right amount of sap to glaze the architecture and add a brilliant shine. The vocals are bleak and acrid, but not too much of one or the other range. In fact, there is vocally never a dull moment, the vocals themselves never verge on monotonous, running like thick molasses cutting through the mix like acid. There are more decorations to adorn the multiplex, not the least of which would be the female vocals that cleanly rise here and there to a very original (pretty?) grit of sandpaper.

Mastering compliments of Steve Austin (Today Is The Day) makes sure no frequency is lost and the fullness of texture is very apparent. This should tell of the direction, but if confusion sets in - recommended for the more open minded audiences of Weedeater, Wino (you know him), Melvins,(heavier moments of) Faith No More, but with that one could also add Helmet, Corrosion Of Conformity, and Tad(???). Southern Lords more stoned affairs definitely sit well with this recording.

The cover sports some very cartoon-esque visions, exceedingly generic and hardly the sort of vision to prepare the listener for the contents. In fact some of the visual segments lend toward the more basic stoner fare (outlines and borders), but this is hardly reason to avoid just rather an observation so that anyone interested will look beyond said misrepresentation. This hopefully will not be the downfall of this release as there are so many surprises and textures within a context that seems to have so far done itself in with banality.

It is also very appropriate to note that upon completing drum tracks for this release - Hunter Holland passed away. With such an array of hook and groove, Hunter really felt this whole album out and made each song his own. It is truly a sad thing that this Gollum's first album does become his last. "The Core" is truly a testament to his skill and mastery of feel. R.I.P.