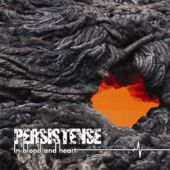 The Netherlands group Persistense has been on the metallic march since 2000, and they have had a lot of acclaim by what I have read. Calling their own style of metal at one time ‘Swingthrash’, the band was known for original yet very heavy music... now with the release of full album number one, the band is poised to take over the metal landscape.

Powered by a need to be making seismically heavy but well written metal, Persistense has come forth with a album that can be only described as almost unbridled chaos with this overtone of pure technical havoc. Everything from Thrash, Extreme, Power Metal to even having the Classic Metal elements all come together within this extraordinary five piece - and develops into what could be called illustrious in both form and raw explosiveness

Nine songs populate their first full length offering, called "In Blood And Heart" to make you assured that there are people out in the world making sure metal in no ways has become dull and predictable. Unyielding and relentless, Persistense takes what they know musically and makes sure that is equally heavy and ass kicking brutal in it attack, all the while making sure that the intelligence they have as a group is never compromised.

This band really does have all of the makings and talent to be a amazing force in metal, or even in music in general. Truly Persistense is a indomitable band that has stepped out of the shadows and is in the forefront, truly orchestrating a new genesis in what metal can be.